When and how must OOS examinations be triggered?

Does an OOS (OOX) examination have to be triggered if a laboratory error is ruled out and a production error has already been found and documented?

Must an OOS (OOX) examination of the ongoing stability tests be triggered if a laboratory error is ruled out and an OOS result was expected?

To your first question:

If an error has occurred during production and has been documented, this should be recorded using the deviation system. Obviously, however, the product was still analysed - possibly with the expectation that the production error would not lead to an OOS. But if a (release) analysis is performed and one result is an OOS, you need in any case to perform an OOS investigation. After all, there is also the possibility that the OOS result is due to a laboratory error and your batch is within the specification despite the production deviation!

In this case I would follow the OOS procedure as described in chapter 14.G of the GMP Compliance Adviser (see figure 1).

If you can rule out obvious and non-obvious laboratory errors and document this in an appropriate manner, you will, during the error analysis, finally consider a manufacturing error as the cause of the OOS result. This could be documented by a notification of deviation. Thus, the process would be clearly mapped and comprehensible, even if this of course means a certain effort. 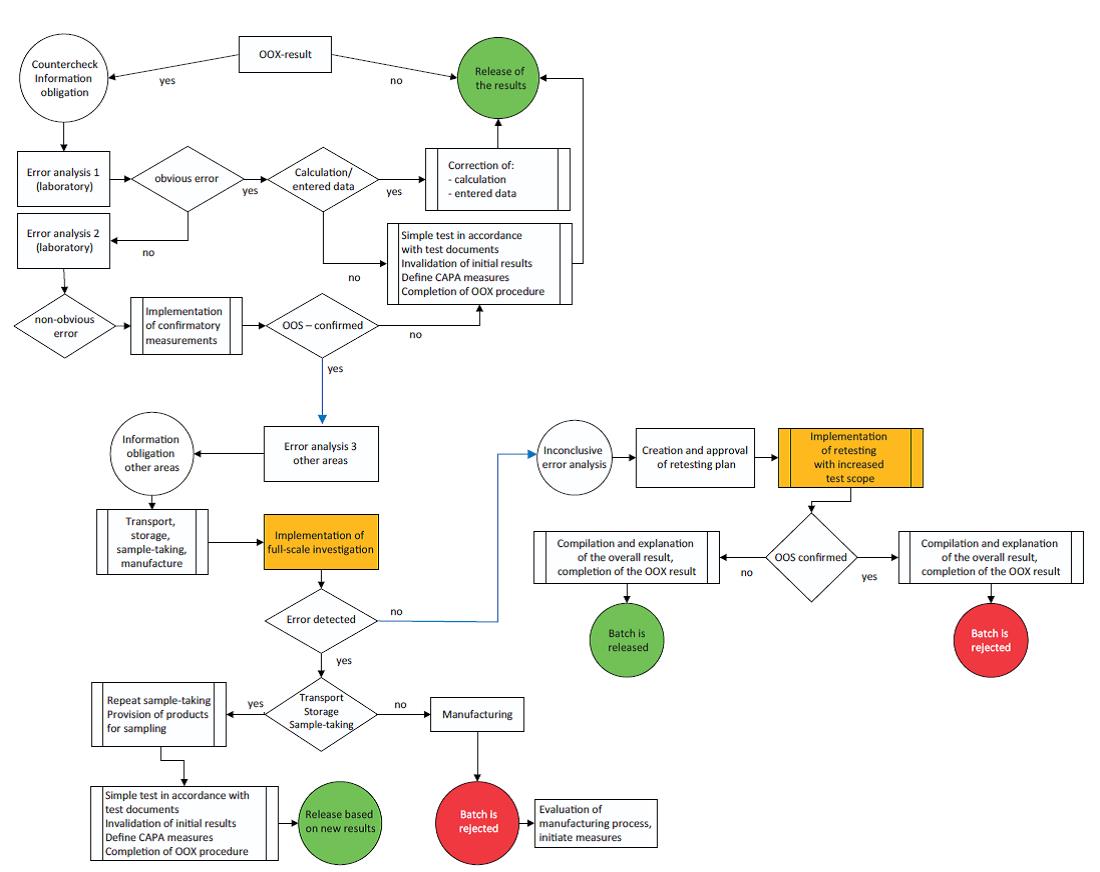 And now to the second question:

This is also a 'foreseeable' deviation from the specification, which is plausible on the basis of stability studies. If I were you, I would follow the OOS process and prove that you can rule out a laboratory error. The result of the 'error analysis' would be the influence of temperature/humidity/runtime, which would have to be evaluated with regard to the shelf-life specification.

Answer from a GMP inspector

It is more convenient to routinely process and, above all, document OOS results detected in the QC according to the same procedure. And if such a process is initiated, it is not imperative that the OOS is confirmed.

In the first example described, it is obvious that part of the OOS procedure has already been completed. However, it should be clarified whether the production error that was identified as the cause of the OOS was already noticed during production (and could have been treated here as a deviation) or only during QC.

Also, an OOS during stability testing should be treated according to the formal procedure, in order to guarantee systematic processing and comprehensibility/transparency, particularly since such results also always entail measures, maybe even a recall.

Especially in such non-compliance situations, I consider a more formal approach to be more effective - one is taken by the hand and guided through all stations.

Answer from a Quality Unit Manager

For the first case, there seems to have already been a deviation in production in advance. This should actually be dealt within the deviation system with the result of an OOS. If this deviation is noticed later (e.g. in the Batch Record Review, and perhaps parallel to the started analysis), the OOS procedure should be initiated. The statement that there is no laboratory error actually implies that this has been checked. This would also be part of the OOS procedure.

In the case of the stability study, an OOS or OOT procedure should also be opened in order to formally secure the data. Ideally, the OOX procedure for the studies is described in such a way that no unnecessary loops, e.g. production checks, arise and can simply be completed by evaluation. Here, too, the examination shown to exclude the laboratory error implies for me that an OOX procedure has probably been started here.