LOGFILE No. 33/2016 – Achieving “Quality beyond Compliance” is a Matter of Leadership

Achieving “Quality beyond Compliance” is a Matter of Leadership

The first annual meeting of the Parenteral Drug Association (PDA) in Europe was a smashing success. In outstanding talks the speakers elucidated not only far-reaching developments, but also new developments in the specific area of sterile and aseptic manufacturing. Today’s feature article sheds light on the introductory talk given by Martin VanTrieste, Chief Quality Officer of Amgen. He commands attention, at the same time instilling in his listeners the courage to get started on the road to Quality beyond Compliance.

The first PDA Europe Annual Meeting in Berlin at the end of June 2016 bore the caption “The Future in Injectables”.

Although it was quite unusual that the keynote speeches given in the first half of the opening day had little to do with injectables themselves, it was definitely a sign of things to come. The next day and a half were filled all the more comprehensively with general and specialised topics relating to the manufacture of parenteral medicinal products.

„Going from Good to Great Requires Quality beyond Compliance“

Martin VanTrieste started off with a retrospective review of his 33-year-long career, a period marked by fundamental changes in the pharmaceutical industry. He gave an impressive presentation of progress made in various areas. For example, the duration of hospitalisation for surgery has been reduced from seven days to seven hours. Huge improvements in pain therapy and surgical techniques have been achieved. Recovery times have been reduced in part from six to three months. Biotechnology is currently undergoing massive change and in VanTrieste's opinion, new approaches will change the world in much the same way as with Uber and Airbnb. Using examples from Amgen, he demonstrated the progress that has been made in conventional biotechnological factories as opposed to modern factories. For instance, water use, CO2 emissions, energy use and solid wastes have been reduced by up to 90 %. And the future will surpass this, says Martin VanTrieste

Robots will dominate future production and inline tests will instantaneously determine quality, including sterility. VanTrieste sees automation advancing while humans disappear from manufacturing. Other industries have pointed out the way - sooner or later the pharmaceutical industry will follow suit.

A lasting impression is imparted by the change in quality from control to compliance and onwards to “Quality beyond Compliance”. The speaker’s credo mandates that quality systems must continue their development. 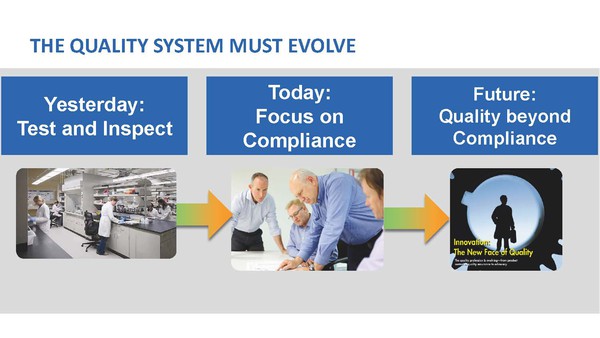 A change of this magnitude can only be accomplished with leadership capabilities. From that point on, VanTrieste was in his element. A tangible spark of enthusiasm flashed over to the audience. VanTrieste spoke of the agonising course Amgen had to take over the past ten years, still without having achieved their goal - if it will ever be reached at all.

He brought up three measures that form the core of this treatment:

These decisions have had and continue to have an enormous impact on the processes. Amgen is now pursuing the goal of Six Sigma Quality that has evolved from them.

VanTrieste is very critical of the SOP culture. “Why are SOPs still being created as they were 50 years ago?” Today’s SOPs should:

For example, Amgen has concluded a partnership with Youtube in order to make use of their know-how to create SOPs that contain video clips.

And the efforts have paid off for Amgen. The number of parameters for the 6σ level has increased from 68 % in 2008 to 84 % in 2015. It is no wonder that in the same time period the number of defects dropped from 1.8 to 2.0 per batch. And fewer defects mean lower costs. VanTrieste motivated the conference attendees to embark on this path, even though he himself is planning to retire. Hard to believe considering how highly charged with energy he is.

My best wishes go to Martin VanTrieste for the future - perhaps we shall be lucky enough for him to grant us a few more shining hours such as the one we experienced in this plea for uncompromising quality.