Indispensable: The Determination of PDE Values as Exposure Limits

Indispensable: The Determination of PDE Values as Exposure Limits for Risk Analysis in Shared Facilities

It is not possible to estimate the danger or toxicity of APIs only according to their therapeutic group.
Results of an analysis of 1200 active substances.

In order to assist the pharmaceutical industry in implementing the new GMP requirements for shared facilities, Azierta, as an external service provider, started a new project to calculate the PDE values for 1200 active pharmaceutical ingredients (APIs). After the toxicological evaluation, Azierta performed a thorough analysis of the obtained data. This huge and unique data base allows a well-grounded revision and a close analysis of the results obtained. Categorization of PDE values was made, distinguishing 5 groups and assigning a level of danger to each of them. The results were analysed according to the therapeutic groups (ATC classification).

In 2014 the European Medicines Agency (EMA) published a guideline (Guideline on setting health based exposure limits for use in risk identification in the manufacture of different medicinal products in shared facilities, EMA/CHMP/CVMP/ SWP/169430/2012) to define the limits of exposure to establish the risk in multiproduct facilities. It involves the determination of exposure limits according to toxicological criteria based on the inherent characteristics of each substance, instead of the traditional non-scientifically based limits (e.g. 10 ppm or 1/1000 of the minimum therapeutic dose). The proposed procedure for the determination of health-based exposure limits is drawn from the method for establishing the Permitted Daily Exposure (PDE).

Methodology for the study of 1200 active substances

A total of 1200 active substances were evaluated. According to the available information, the most appropriate starting value (POD) for each case has been determined individually. Depending on the selected POD and considering both the baseline study and the toxicological findings for the substance in question, the necessary adjustment factors (F1, F2, F3, F4, F5) have been determined and the PDE value has been calculated using the equation described in the EMA PDE Guideline.

The APIs were classified into 14 major groups on a first level and subdivided into five levels each. For this study only the classification up to the third level has been considered.

Based on the categorisations described in Occupational Health for OEL (Occupational Exposure Limits) values by Safebridge and Naumann, a categorization for the PDE (PDE banding) is established to analyse the results obtained. Various levels of hazardous substances are defined according to their PDE value, with 5 groups (1-5) being differentiated from lower to higher toxicity (figure 2).

A closer look at the group of substances with very high level of danger (level 5, PDE < 1 μg/day) revealed that it is not only represented by the expected substances, such as hormones and cytotoxics (classes H, G, L), but by substances that belong to other therapeutic groups such as N (nervous system), S (sense organs), R (respiratory system) and A (alimentary tract and metabolism) (figure 3). 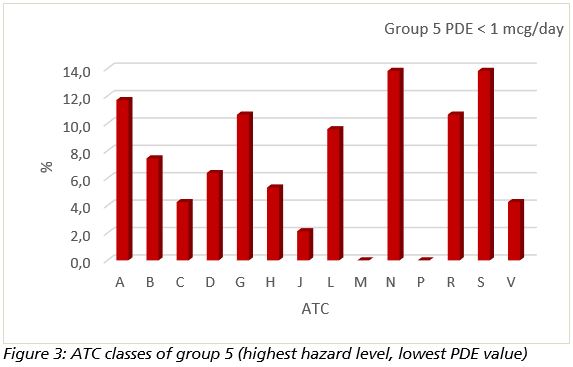 We analysed individually some of the ATC classes that have the greatest contribution in group 5 of the PDE categorisation (G, H, L, S, N, R). Significant percentages for the PDE banding groups with low or very low hazard could also be identified within these ATC classes (figure 4). 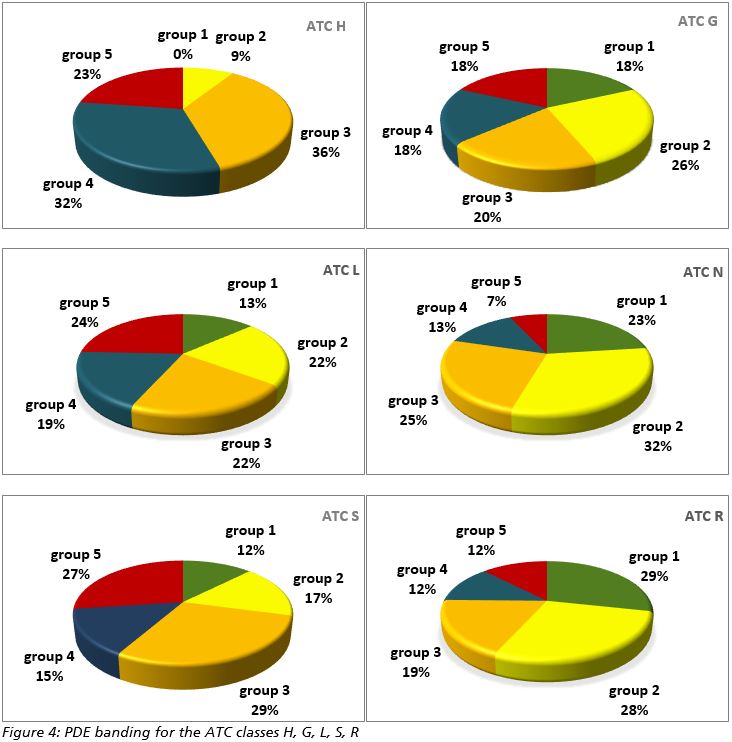 The analysis revealed that the specific toxicological and pharmacological properties of each API have to be evaluated in a PDE report in order to establish health-based exposure limits for medicinal products that are manufactured in shared facilities. It is not possible to estimate the danger or toxicity of APIs only according to their therapeutic group. Not all substances with a high or very high toxicity level correspond to the expected groups such as hormones and cytotoxic agents, and not all APIs in these therapeutic groups are highly hazardous.

Do you want more information?