EDQM inspections and trends of deficiencies relating to API facilities

In recent years, there has been an increase in international drug inspections to assure that good manufacturing practice (GMP) is being appropriately applied no matter where a bulk pharmaceutical chemical or active pharmaceutical ingredient (API) is made. With the regulation and inspection of API manufacturers falling under agencies operating in the European Economic Area, there has been little (until now) trend data relating to facility inspections.

As part of transparency in relation to the European Directorate for the Quality of Medicines (EDQM) Inspection Programme, the European Union directorate has issued an overview of common trends and findings titled “EDQM Inspections and Trends of Deficiencies Overview 2006 to 2018”[1]. This document was issued in May 2019. Several of the trends identified in the document will be of interest to those involved with API manufacture, as well as for others involved with pharmaceuticals and healthcare in terms of general GMP observances. This article draws out the main themes.

An API is the basic drug itself with the desired medicinal (pharmaceutical) properties. This can relate to classical manufacturing; or to materials derived from plant, animal or microbial sources. The World Health Organization definition of an API is: Any substance or combination of substances used in a finished pharmaceutical product (FPP), intended to furnish pharmacological activity or to otherwise have direct effect in the diagnosis, cure, mitigation, treatment or prevention of disease, or to have direct effect in restoring, correcting or modifying physiological functions in human beings [2].

Some drugs, such as combination therapies, have multiple active ingredients to treat different symptoms or act in different ways. Several years ago, it was more commonplace for the production of APIs to be undertaken by the pharmaceutical companies themselves in their home countries. In more recent years, many companies have opted to have the manufacturing undertaken at a different facility, often in a different country. Such measures have tended to be driven by a desire to lower costs. This increase in supply chain complexity has led to challenges for core pharmaceutical manufacturers, for API producers, and for regulators. This is not least because the quality of APIs has a significant effect on the efficacy and safety of medications. Poorly manufactured or compromised APIs have been connected to serious issues, such as illnesses and even death. There have been rigorous regulatory guidelines produced and more focused inspections put into place. The overall applicability of GMP for API manufacturers is set out in International Council for Harmonisation (ICH) Q7 [3].

This document provides a review of data relating to inspections of API facilities that have been conducted by the EDQM between 2006 and 2018. Supporting data includes the geographical location of the inspections; whether the visits were initial or re-inspections; a summary of the outcomes; distribution of the observed deficiencies to EU Guidelines to GMP; and information relating to the frequency of the findings.

As the data indicates, India and China are dominating global API manufacturing. Of these inspections, the re-inspection to new inspection rate is approximately 70:30, respectively. Care is needed when interpreting such figures, as the higher proportion of non-compliant sites could be the result of the ability of the EDQM to identify sites with higher risk of non-compliance and to focus more greatly on them.

Types of deficiencies by quality system

The main deficiencies noted across the review period are as follows. 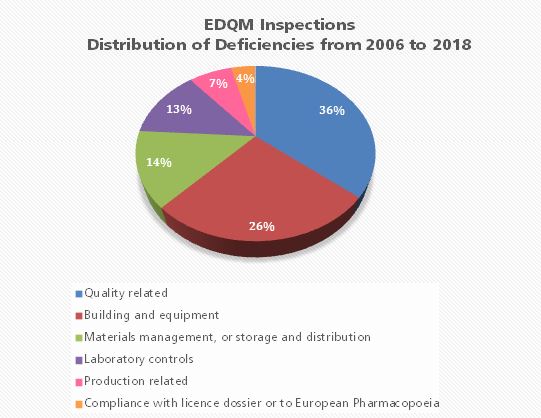 With the categorisation of the deficiencies, the EDQM have adopted a common quality systems approach.

In terms of how these categories have altered over time, quality-related matters (at 40% in 2018) and laboratory control concerns (at 17% in 2018) have shown an increase, while matters related to licencing, production and materials have shown an improvement. That said, overall the distribution of the deficiencies is rather stable throughout the years. No detail is provided as to why quality-related matters have stepped up and why, for example, production issues are down. As it stands, this trend runs differently from reviews produced in relation to other areas of GMP, such as sterile manufacturing where production and facility issues remain high (see GMP Review 2017;16(2)) [4]. However, the analysis does show for the 2017–2018 period:

These findings were largely classified as ‘others’ (using the standard European approach to the categorisation of GMP issues), with 151 ‘majors’ and just two ‘critical’ observations. With this breakdown, the EDQM does point out that: “the combination of major findings may lead to an overall critical risk for public health (and therefore a non-compliant inspection outcome without individual critical deficiencies)”.

With the different quality systems, as reviewed above, quality-related matters feature most greatly in terms of non-compliances. One of the most common areas of concern within this system is with insufficient oversight of quality unit over GMP activities. This includes the following, as the report indicates.

Also called out with the quality system are the inconsistent or inadequate application of quality risk management principles, most notably in relation to production activities, deviations and change control. In several cases of change control, the problem was found not to be a deep‐rooted practice, or something which was under-reported. A related concern was with the impact of changes not being properly assessed.

A further concern is that annual quality reviews are either not being undertaken or are incomplete (in that not all batches are reflected), or are not used as a quality tool by companies (such as trends not being identified and acted upon). Also, within the general concern with quality, are the following.

With materials management, the number one deficiency is insufficient approval and management of vendors of key starting materials or intermediates. The second area raised most often is the loss of traceability due to insufficient identification of containers; and third is improper storage conditions.

For the production system, the issues cited relate to the blending of batches, especially when this occurs without prior appropriate testing and with a lack of control of solvent recovery.

For the laboratory system, the highest ranked concern pertains to fraudulent practices regarding testing activities, such as pretesting or “testing into compliance”. This is followed by deleting OOS results; and a general unreliability of analytical or microbiological results. Also noted are issues with Chemical Reference Standards; with not following the appropriate European Pharmacopoeia monographs; and insufficient establishment of secondary or in-house standards. Laboratories are also called out for insufficient qualification and maintenance of equipment.

A further area that cuts across the different quality audit systems is data integrity. The EDQM assesses that the majority of breaches of data integrity occur with documentation practice and in laboratory controls. Other issues have tended to be observed in relation to process and equipment validation as well as controls on computerised systems.

The most common data integrity issues are insufficient controls to prevent data manipulation and lack or insufficient review of audit trail. To add to these, inspectors have also noted an absence of management of access levels, which can cause the risk of a loss of traceability, together with a lack of sufficient controls to prevent the manipulation of data. Beyond computerised systems, other issues related to data integrity flagged include the following.

It is noticeable that 44% of critical and 25% of major deficiencies observed between 2015 and 2018 were related to data integrity issues, indicative of how the pharmaceutical sector overall continued to struggle with the subject of data governance.

Pharmaceutical companies purchasing APIs have not been immune to criticism and inspection findings either. Some common deficiencies here include the following.

These pharmaceutical company issues indicate that some companies do not fully understand what is expected for their own part in relation to API GMP or do not have appropriate systems in place to comply fully.

The list of key findings from the inspection of API facilities provides background context to some of the challenges that API manufacturers are facing, as well as an indication of the current focus of European inspectorate bodies. Some of these trends show similarities to the wider pharmaceutical GMP challenges, such as the focus on data integrity. Through issuing the review, the EDQM outlined the main non-compliances pertaining to API manufacture. Here, quality-related issues constitute the main reasons for non-compliances during GMP inspections, which sends a clear signal to API manufacturers about their areas of focus as well as notifying finished products manufacturers as to the most important considerations when selecting API suppliers and topics for cross-company auditing. 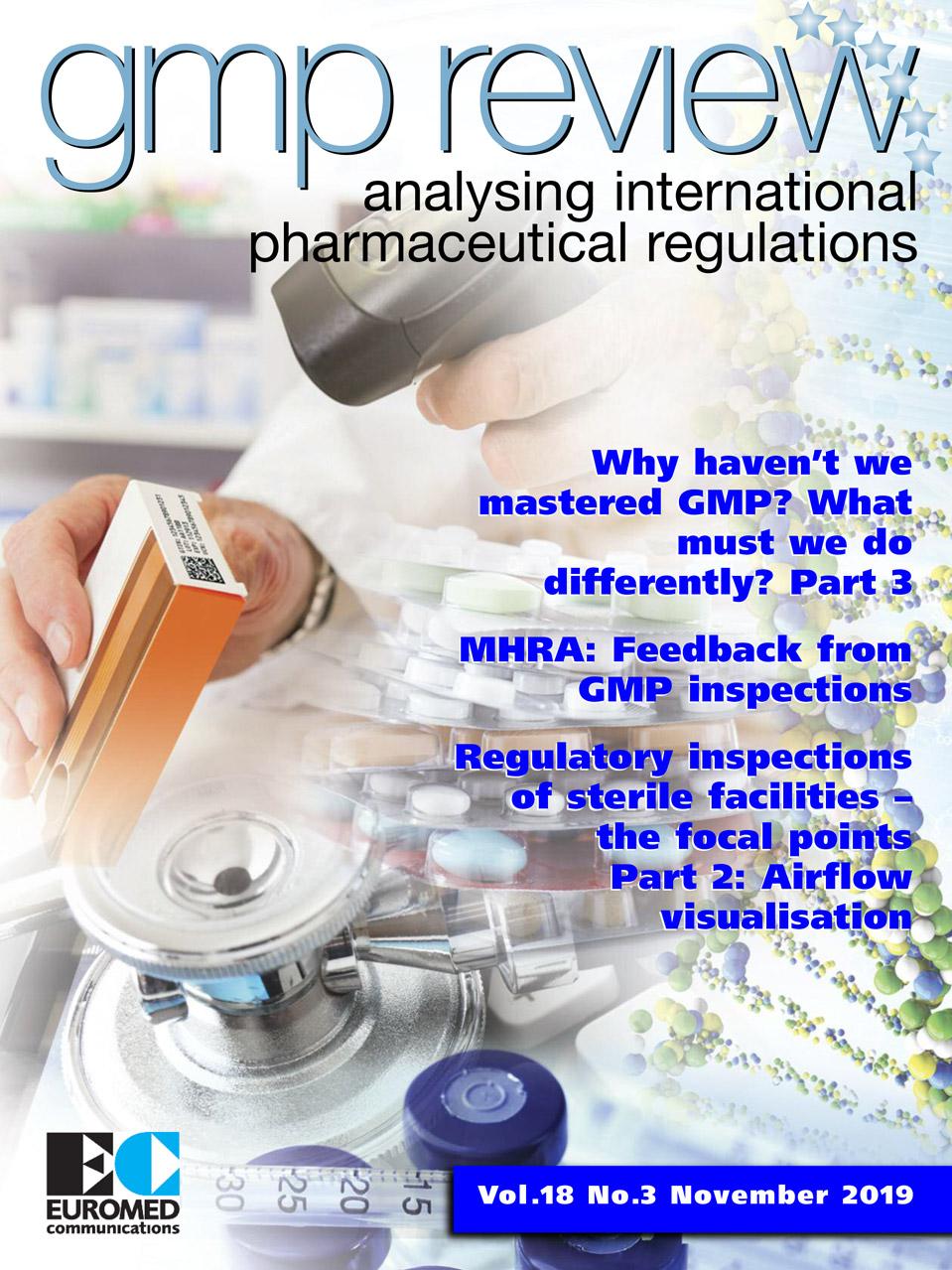 This article, “EDQM inspections and trends of deficiencies relati”, is reproduced from a recent issue of gmp review, a quarterly journal researched and edited by an expert team experienced in all aspects of pharmaceutical manufacturing and control.